Professor Zhiping Zheng’s group from the Department of Chemistry at the Southern University of Science and Technology (SUSTech) has recently made a series of developments in the field of functionalization of rare earth nanomaterials. Their results have been published in high-level journals, such as CCS Chemistry, Nano Research, and Small. 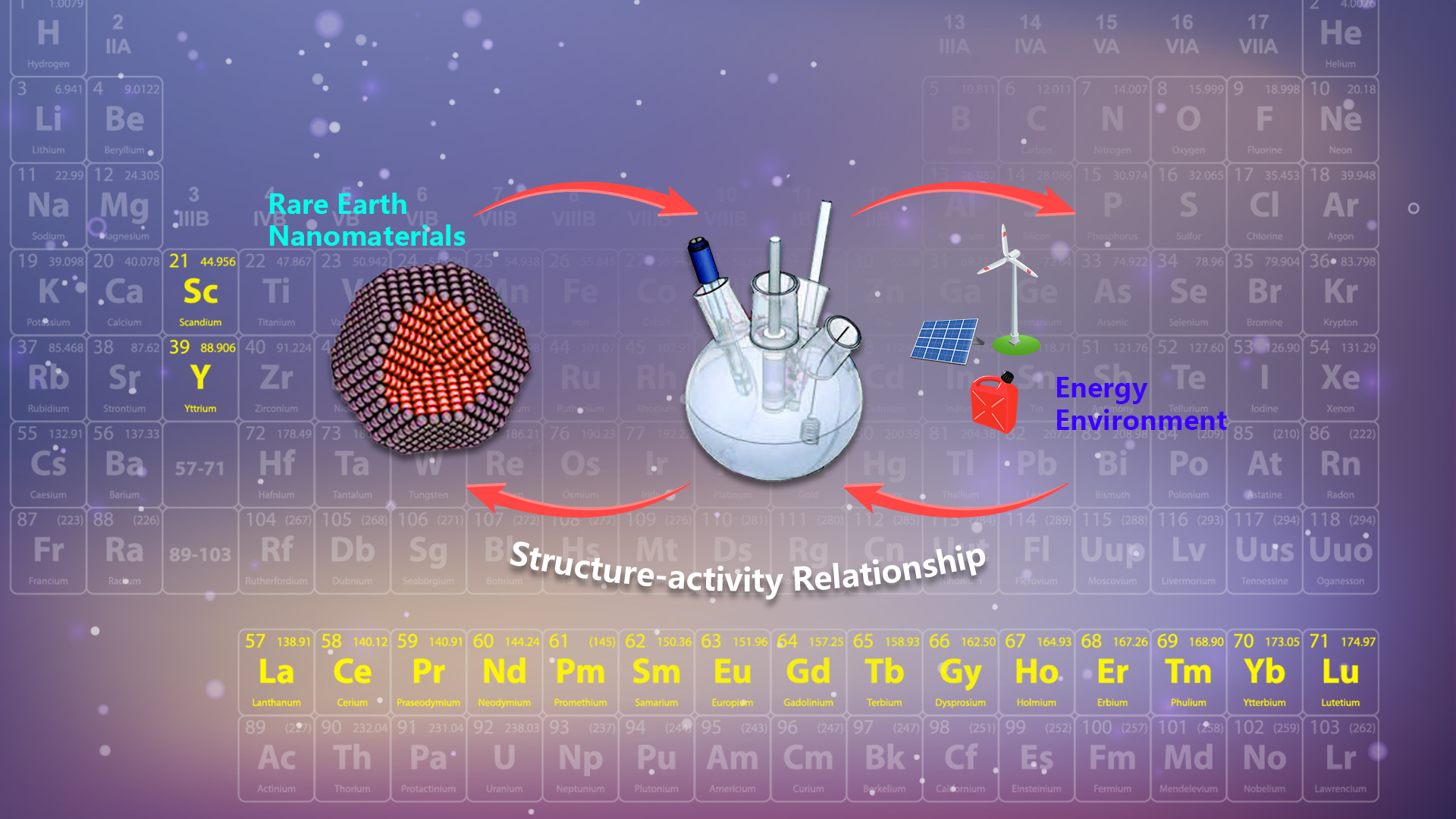 The first paper, entitled “Hybrid Bioelastomer Reinforced by Ultrathin Nanowires of Lanthanide Hydroxycarbonates for Promising Biomedical Applications,” was published in CCS Chemistry. It focused on biomedical applications of rare earth nanomaterials (Figure 1). Hybrids composed of biocompatible polymers reinforced with inorganic nanomaterials are useful for many biomedical applications, including implantation and tissue regeneration and engineering.

Prof. Zheng’s group developed a new type of hybrid prepared by doping ultrathin nanowires of lanthanide hydroxycarbonates into classical biocompatible poly(citrates-siloxane). The doping of the inorganic nanowires imparts the hybrids with excellent miscibility with the polymeric matrix, producing hybrids with high elasticity and high tensile strength.

The hybrids containing Eu(III) and Gd(III) display their respective luminescence and magnetic properties and thus, offer opportunities to monitor the fate of such hybrids when used in vivo. Little degradation and excellent biocompatibility of these hybrids have also been demonstrated. Together, these favorable traits portend useful applications of the newly developed hybrid elastomers. 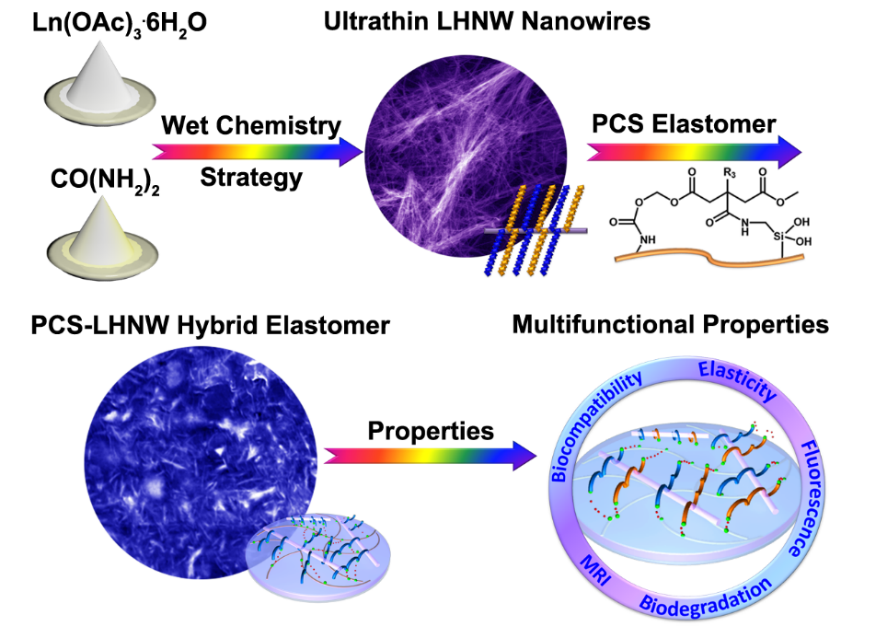 Non-noble metal catalysts are suitable for the oxygen evolution reaction (OER) due to their original oxidation states and oxygen coordination environments. This can regulate the adsorption of OH– at the active sites to facilitate the formation of oxygen-containing intermediates.

However, the difficulties encountered in converting intermediates (M-OH, M-O, and M-OOH) lead to low efficiency. Decorations of transition metal catalysts with foreign elements are regarded as practical solutions, among which decoration with Ce-based materials (CeBM: CeO2, CeOX, and Ce-doped) is the most prominent.

This review summarizes the basic types of CeBM used as co-catalysts for OER. The catalytic functions of these materials can be attributed to the following; Promoting electron transformation, regulating active sites, introducing oxygen vacancies, and enhancing structure stability.

Meanwhile, the remaining challenges in this field are that the mechanism of CeBM for improving performance remains elusive, the chasm between catalytic efficiency and commercialization is still currently unbridgeable, and the expansion of application prospects is still lacking.

Yanyan Li in Prof. Zheng’s group is the first author of this work. Xinyu Zhang and Zhiping Zheng are the corresponding authors.

The third paper, entitled “Atomic-Level Correlation Between the Electrochemical Performance of an Oxygen-Evolving Catalyst and the Effects of CeO2 Functionalization,” was published in Nano Research. It studied the energy catalysis of rare earth CeO2 functionalized nanomaterials (Figure 3).

The effects of CeO2 are mainly based on the general understanding of its redox properties and the presence of oxygen vacancies. Detailed experimental evidence in support of the putative changes in the metal electronic structures is lacking. Based on this, Prof. Zheng’s group anchored CeO2 nanoparticles (~ 5nm) onto dandelion-like bimetal FeCo LDH to form CeO2-FeCo LDH heterostructure through charge attraction effect.

The formation of the CeO2/FeCo LDH heterogeneous interface was confirmed by Cs-TEM characterization. Key parameters including onset potential, overpotential, and Tafel slope collectively point to the superior performance of the CeO2-decorated LDH catalyst and, therefore, the effects of CeO2 functionalization.

In order to reveal the structure-activity relationship, Cs-TEM and electron energy loss spectroscopy (EELS) were used to reveal the electronic structure changes across the interface between CeO2 and the parent FeCo LDH at the atomic level for the first time. The decoration of CeO2 can increase the formation of the catalytically active Co3+. The more Lewis acidic Co3+ ions help the enrichment and adsorption of OH– at the initial stage of the catalytic process, accelerating forward conversion of the intermediates. Accelerated formation of Co-OOH – the intermediate prior to the release of O2 – at a reduced potential was observed by using in-situ Raman spectroscopy. 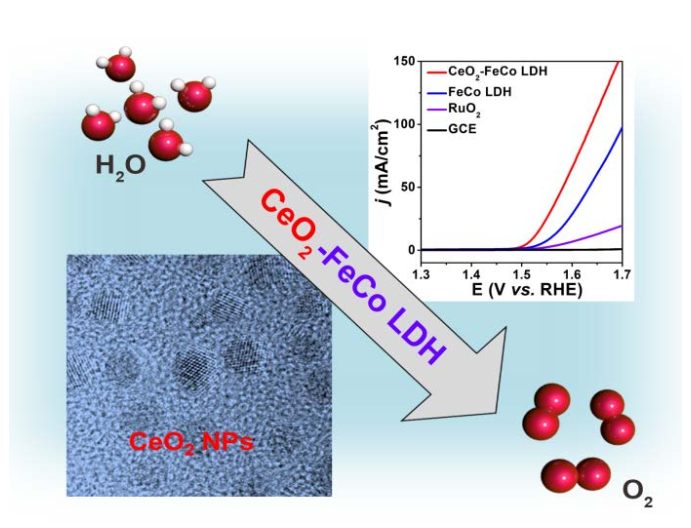 Figure 3. Correlation between the electrochemical performance of an oxygen-evolving catalyst and the effects of CeO2 functionalization at an atomic level.

Prof. Zheng’s group also researched the energy catalysis of single-atom catalysts (Figure 4). This paper, entitled “Study on the Structure-Activity Relationship Between Single-atom, Cluster and Nanoparticle Catalysts in a Hierarchical Structure for Oxygen Reduction Reaction,” was published in Small.

Literature reports have shown that in primary structures, single-atom catalysts exhibit better performance than clusters and nanoparticles due to their maximum atom utilization and the fine-tuning of the electronic structure of the active sites. Hierarchical structures have recently been studied because of increased active sites and orderliness of channels significantly improves the catalytic performance compared to primary structures, especially in nanoparticles. However, the different-sized effect of catalysts research has not been reported.

The group used a unique hollow double-shell structure (a distinct cavity-containing) as a hierarchical model to study the possible difference between single atom, cluster, and nanoparticle and establish the corresponding structure-activity relationship.

Yanyan Li and Xiaorong Zhu from Nanjing Normal University (NNU) are the first authors of this work. Xinyu Zhang, Zhiping Zheng, and Yafei Li from NNU and are the corresponding authors. Figure. 4. Catalytic research of size effect in a hierarchical structure.